Microsoft creates operating systems that are designed towork on a huge variety of computers, new and old. Most of the hardware it runs on is not made by Microsoft, but by the likes of Dell, HP or Toshiba.

Apple has one customer for its operating system: Apple. With updates to the hardware, implementing new technologies, Apple designs software to take advantage of those changes. The work in tandem. But it can leave customers who’d want the new features with older Apple hardware out of luck. And software developers for Apple have to update their programs to run on the new Apple operating system. Some don’t, or financially can’t, so their programs can no longer run on the new computers. Catalina is its name, macOS 10.15. It’s the latest OS.

The biggest, most important thing to know about Catalina is it will not run a LOT of software you may be used to using. Upgrading might break many of your essential workflow programs. The same may be true for macOS 11.0 called Big Sur, which is in beta testing as of this writing. The reason is the transition from 32-bit to all 64-bit applications – 32-bit is the floppy disk drive of software. Steve Jobs dropped the floppy drive to much public gnashing of teeth to move the world of computing forward. Catalina won’t run anything that is, or has components that are, 32-bit. Programs like Avid Media Composer. It would be an unhappy surprise to find you’ve bought a brand new MacBook Pro, but your editing software doesn’t work on it.

The software developers at Avid have been working diligently to update Media Composer to work on the new macOS. Catalina was released in October of 2019. They delivered Catalina compatible Media Composer in April of 2020 (hence AMC version 2020.4). But some components didn’t make the update because they had 32-bit components. Avid has not updated those, and replaced them with the new Titler+.

The parts left behind included the Title Tool and Marquee. Both were replaced by Titler+, the new AMC title tool. Media Composer also wouldn’t support QuickTime, meaning there’d no longer be outputs of Same-as-Source and QuickTime Reference (ask your assistant what that means).

I have long declined to upgrade any of my Macs to Catalina. Basically, I was afraid of what it would break. But I decided to upgrade my least-used Mac computer to see the results. I have a Mac mini in my TV setup, used to play movies off an external drive, and as a way to access HBO Max. HBO became unavailable on Roku and TiVo, my preferred devices. The Mac mini can also play Amazon Prime in a browser, or Netflix on the application Clicker. Whatever it broke wouldn’t stop me from getting work done.

Upgrading from Mojave, macOS 10.14, to Catalina was simple. The Setting icon in the dock regularly would prompt to make the upgrade. 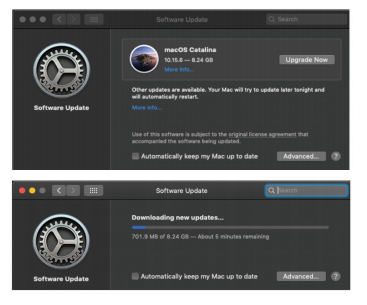 And then I held my breath. Well, not really. I’d be dead if true. It took 30-40 minutes of downloading and rebooting before the new background for Catalina showed.

A new folder, ‘Relocated Items,’ appeared on the desktop. These are components that because of being 32-bit will no longer work. And that was it. So, what programs did it break? Surprisingly few. When Apple says we’re going 64-bit, most all Mac developers start updating their applications. The only two of my commonly-used applications that would no longer work are MPEG Streamclip and QuickTime 7. There are a lot of other applications that can replace MPEG Streamclip as a compression tool, such as Adobe’s Media Encoder, Apple’s Compressor and Handbrake. QuickTime X replaces 7. Certainly not the end of the world. I know Media Composer works on Catalina because I’ve read enough stories of people using it. It isn’t a completely smooth transition. A lot of people are having a hard time adjusting to the Titler+ tool. And exporting is more complicated. But it does work. Ultimately, upgrading wasn’t the nightmare I expected. And next up is Big Sur. 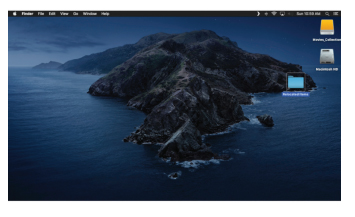 Where the World is Going
Because of the lead time to publish this magazine, it’s difficult to know what will have changed by the time you are reading this article. With any luck (and we are way due), we’ll all be getting back at work and almost normal. Until then, we have to adjust to the current situation. I interviewed four people for their perspective on how we’re adjusting. Steve Welke is a post producer working on The Stand for CBS All Access.

The entire miniseries had been shot by early February except for final scenes, which were planned for a week of shootingin Las Vegas. As the reality of the pandemic set in, it was decided that each editor would work from home. A copy of the full shared storage was made for each editor, assistant and VFX editor. Eight copies of the entire mini-series, plus a backup. Three editors got two 20TB RAID drives. The assistants and VFX team each got 48TB RAID drives. Each system in addition has a 4TB drive for local renders.

The Las Vegas shoot was completed in August. Each day’s media was no more than 5GB so the lab pushed media directly through Aspera Cargo to each system. TeamViewer is one method of communication between the remote workstations. It allows one computer to muck around in a remote system. A system called Resilio Connect/Sync has been used to keep each workstation’s RAID media in sync. It can be set up and customized to sync media over peer-to-peer technology, which is similar to the file transfer service Aspera.

For remote collaboration they use Evercast on some systems. Pacific Post has made other remote connections. Steve’s evaluation: “Can it be done? Yes. Is it better? No. What took a day takes three to four.” Michael Nouryeh is working from home as a second assistant on the feature film The Tomorrow War. His system was setup by FotoKem and includes a Mac trash can and two monitors. The Nexis media storage is in Hollywood. From his Mac at home, Michael logs into a remote Windows PC workstation, as do all the crew except for the editor, Roger Barton, ACE. Wait, what? Windows? HP’s Remote Graphics Software (RGS) is used for the remote connection. It has no Mac version.

Michael opens a Windows workspace where he runs Avid Media Composer which is at a remote site. All of which sounds like a clunky arrangement, mixing computer operating systems over the internet. “Playback can lag, based on your internet speed,” says Michael. His primary task is to keep Barton, who has media stored locally in his edit room, in sync with everyone else. He is using FotoKem’s globalDATA system for asset distribution and transfer. Each morning he looks at the Nexis and checks every partition for new renders, music, sound, projects and VFX. There are no dailies as production long ago wrapped. They are currently awaiting on the actor Chris Pratt to become available for additional shooting.

The biggest problem with working remotely is isolation. “I miss the osmosis of information one absorbs when editorial is working together in offices. When working remotely, my experience so far is that 99 percent of the information is doled out via text/email/Slack on a need-to-know basis,” says Michael.

Tim Kinzy is waiting for the restart of the CW series Charmed. To finish the previous season, they used local drives with copies of the media. But for the upcoming season they are planning something similar to The Tomorrow War. They are working with Moviola which is recommending Teradici, which uses a proprietary system called PCoIP technology to do the same thing as HP’s RGS software. The editor logs into a remote Windows PC, which opens a window on their local Mac. “You can’t do fullscreen playback very well” with this system, according to Tim.

And “at least for dailies, local storage is ideally the way to go. ”The Pacific Post collaboration system was demoed. “Playback was very smooth, even when multiple users were logged in,” according to Tim.

Andrew Seklir, ACE, is the founder of A Frame Post, an editing system rental company. His company offers two options for shows that can be modified to fit individual needs. The first is PC-overIP. It is essentially the same as the two previous remote setups, where the user logs into a PC workstation and operates Media Composer remotely. A Frame’s recommended remote system uses TGX Remote Desktop, from Mechdyne. Editors and AE’s use two-factor authentication and a secure VPN connection to log into their remote Avid workstations. But the more interesting solution involves having each editor keep a copy of the media locally, which takes out the vagaries of internet connections. Each home workstation has a 20TB32TB RAID/NAS (network attached storage) from Synology.

All workstation RAIDs have the exact same media. To accomplish this, each Avid workstation has an Aspera connection which pulls down dailies from the cloud. Render files, user-generated media, project files and bins are scheduled to sync overnight (or at the push of a button) between the NAS stations using GoodSync.

And software called Mimiq is used to facilitate file naming and bin locking. The Synology workstations live behind a firewall, but assistant editors are able to remote into their editor’s NAS and manage media and files on the other Synology workstations. The advantage to local storage is apparent. It is fast. Going through your internet connection to a remote workstation, to log into a Windows machine is full of pain points and potential errors. And how many times will the editor have to explain to producers and directors why everything is so slow?

A Frame also has solutions for streaming Avid playback to producers and directors for collaboration, i.e. alternatives to Evercast, or Frame.io. So far it seems the trend is to set up editing systems to accommodate the studios’ fear of the internet. I suspect producers and directors will likely find the results hardly bearable. When your neighbors are all watching Tiger King and your internet speed slows to a crawl, so will your progress. And it is the editor who will get yelled at. Rather than listen to the people who know, the studios are listening to the most conservative security advocates, who won’t care if it doesn’t work as long as the dailies on your average boring sitcom are secure at the studio. Sheesh.

I am currently setting up a remote show for Hallmark. The shoot is in North Carolina and Nashville, the post house is in Connecticut, and editorial is in Los Angeles. As I’ve done on previous remote shows, the producers will send a shuttle drive each day from set. My assistant and I will sync in person (from a respectable six feet away, masked). We’ll use Frame.io to share cuts with the director and producer. There may be some director visits to my house for her cut … um, after I get tested
and pass. But there is only one editor, so it is quite simple.

We’re getting this figured out. There will be growing pains. Maybe the studios will get the message about improving the workflow. Like everything these days, I’m not optimistic. So be patient, and stay safe everyone. 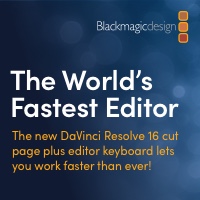 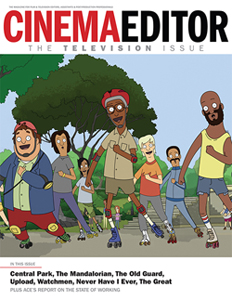 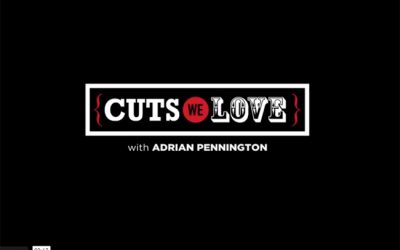 Adrian Pennington and one of the editors of Super 8, Maryann Brandon, ACE   Trending ContentExplore Your Favorite TopicsEditFestTechnologyInterviewsMoviesNewsCinemaEditorMagTelevisionEditors On EditingInternationalAll Videos 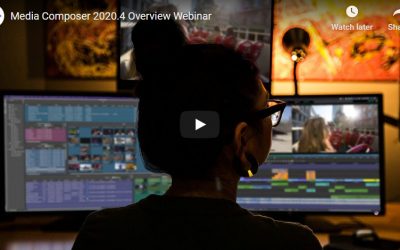 Webinar - Avid product expert Michael Krulik walks users through some of the new features of the Media Composer 2020.4 release  facebooktwitterinstagramRelated ContentExplore Your Favorite TopicsEditFestTechnologyInterviewsMoviesNewsCinemaEditorMagTelevisionEditors On... 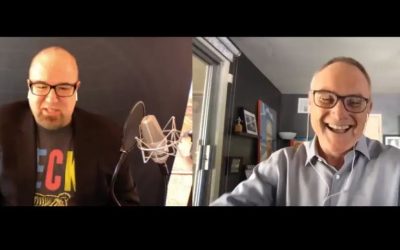