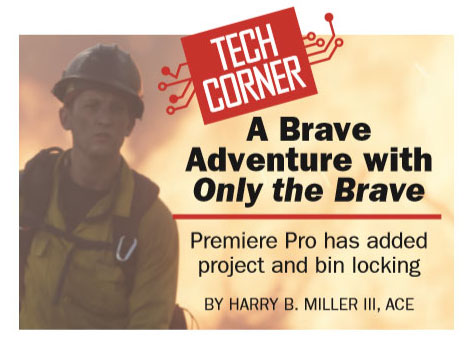 A major advantage Avid Media Composer has had over other NLEs in competing for Hollywood’s editing business is project sharing and bin locking. Project sharing: Any editor or assistant can open a master editing project. Bin locking: Anyone can open any bin contained within the project. That bin would then be locked by the first ‘owner’ and unchangeable for anyone else. Apple’s Final Cut Pro 7 allowed opening of several projects at one time, but nothing could be locked.

Adobe’s Premiere Pro wouldn’t allow one to open multiple projects, nor lock any project. Not anymore. Adobe’s Premiere Pro CC, version 12, now can open multiple projects. And a project opened within a master project can be locked. Exactly like locking an Avid bin. This is a huge advance for Adobe. It is a step that can make them a challenge for Hollywood’s attention.

According to Adobe’s Van Bedient, with Premiere Pro you first create a Master Project (New Project). It acts as a container. Then, go into Preferences, and activate the new setting, Collaboration, Enable Project Locking and provide a Username (or workstation designation). “The design goal was to improve upon existing models, but also for it to be a seamless transition with no learning curve for users familiar with other platforms.”
Other platforms like, oh I don’t know, Media Composer? 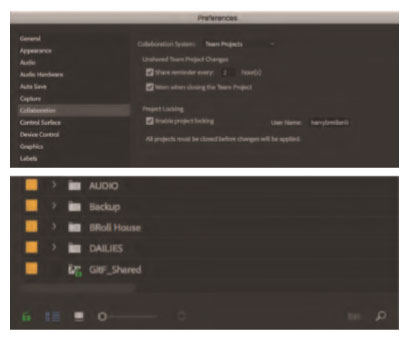 Director Joseph Kosinski’s 2017 feature, Only the Brave, was the first project to use phase one of the beta-locking software. A TV series began using it in October of 2017. Adobe “wants to be more in this world” of creative picture editorial, says Bedient, who is familiar with project sharing NLEs, having worked for 17 years at Avid Technology. Michael Phillips, a respected developer who also spent years at Avid, also is a consultant to Premiere. Adobe is serious.

“We had a great experience. There were some bumps, we had some things we sure needed worked on,” says Billy Fox, ACE, the editor of Only the Brave.

“I had a meeting with a number of Adobe executives and project managers, and said I was interested but … I have to have shared projects.” Not ready for the editor’s cut, Adobe promised a version of Premiere with project locking by the director’s cut. After talking to Kosinski, and being assured of support from Adobe, they went with Premiere to edit Only the Brave.

Asked about this first stage of Premiere with bin locking, assistant editor Jamie Clarke says, “It worked great for the first version. We kept pushing Adobe to keep developing.” The version currently released would, to Clarke, be stage three.

The post crew included Fox, Clarke, another assistant and a VFX editor. The latter worked with Adobe’s After Effects. “The whole world was all shared. And it worked fantastically,” says Fox.

Asked to compare Premiere to other NLEs, Fox says “I do a tremendous amount of sound work and I find their sound solution is very sophisticated.” The edit timeline was set to mix in 5.1. “I found the sound quite advanced.”

And his comparison to Avid? “In Premiere, the playback is always going.” The timeline keeps playing, even while you open other folders, or trim clips. “It has an effect in terms of how efficient you are, how much time you save. It has an efficiency in momentum. Avid is a continuous world of stopping.”

Complaints from other productions about slowness opening projects and clunky turnovers to sound didn’t apply here. Time spent opening reels was very acceptable, according to Clarke. And with the new master project paradigm, every reel (project) can be open at one time. And sound turnovers to Skywalker Sound went without issue.

It helped that Only the Brave used a shared storage system called OpenDrives, also used on the David Fincher movie, Gone Girl. The system uses all SSD drives and caches all the assets, to increase the data speed. On this project 24TB of storage were available. Only the Brave shot for 60 days with the Sony F65 camera at 4K resolution. FotoKem’s nextLAB system was hired to sync dailies. They also transcoded all the outputs needed for editorial and viewing over PIX. Editorial got QuickTime ProRes 422, 2K files, transferred overnight from the shoot location in New Mexico to editorial in Los Angeles. The movie was mastered in 4K, HDR at Technicolor.

According to Clarke, the system was about as stable as Media Composer. There were a number of crashes, but AutoSave proved helpful recovering the last edit state. And a big advantage Premiere has over other NLEs is the ability to easily create DCPs for screenings, he added.

In my own limited testing, having two users on a Nexus shared storage system, Premiere worked as advertised. When bins were locked, you couldn’t make any changes in a timeline. Premiere is exceedingly fast when moving through a timeline. Saving the project is extremely fast, although this was a small-sized test, not a large, complex project. And the interface is completely modular, where you can move any window/panel to any screen location.

Reportedly, Adobe has a Hollywood team, a group devoted to making them the number one solution for all editors. On projects like Only the Brave, they had engineers on site to observe the workflow, to see the editor’s face. According to Fox, Adobe pretty much had an office space with post. Having competition among NLEs is good. Final Cut Pro 7 pushed Avid to make many changes to keep competitive. And lots of editors would be happy to contribute to other platforms’ development, as they have with Avid’s Media Composer.

And yet, Adobe will not have an easy time in Hollywood. I found an episodic series that had, in 2017, abandoned Premiere after several episodes and many problems, moving to Media Composer.
The Fox feature, Deadpool, had considerable problems with Premiere (CinemaEditor, Quarter 2, 2016, Vol. 66), especially with AAF turnovers to sound. Because an editor can put a stereo clip and a mono clip in the same audio track, an exported AAF creates three audio channels. And it doesn’t include level or plugin information. Testing this version of Premiere shows no AAF change. And change notes, which are essential for features, were a tremendous problem. And there is a strong bias for Media Composer. With good reason. For Hollywood feature and television editors, nothing around has worked better.

And in other tech news…

BCC Pan And Zoom is still vastly superior to Avid’s Pan & Zoom. Pan And Zoom works best by linking to an image file (.jpg, .tif, etc.), rather than importing. You can work with an uncompressed 4000 x 2670 image, instead of one imported to 1920 x 1080. This allows for a great amount of control over displaying and animating still images. Its most important feature: If the linked file has been moved, breaking the link, BCC Pan And Zoom will display the file name and last known location. With Media Composer’s Pan & Zoom, you get no information if a link is broken, not even the file’s name. BCC also lets you set up a Watch Folder, that will look for files, which can include sub-folders that are searched. And a major flaw has been fixed: BCC Pan And Zoom effect now shows up in an EDL, even if the image file is offline. Previously it did not, leaving out a lot of information for online.

BCC Primatte Studio keyer, also in the latest BCC update, is a fantastic alternative to Media Composer’s SpectraMatte. It features a fast and accurate Auto Analyze keying function, plus many other
controls to refine a chroma key. Those include spill replacement, matte refinement, mask shapes and light wrap. Like many BCC filters, it can use mocha for tracking shapes.

Media Composer Source Settings can now adjust audio sync for individual clips, from sub-frames to five frames in either direction. Even in clips created in (Blackmagic Design’s) Resolve, which cannot be modified in Avid’s perf slip function. Source Settings are accessed by right-clicking on a clip, or in the Source monitor.
And master clips now can be changed. Previously with perf slip, only sub-clips could be changed. Currently in Source Settings one can adjust the color encoding (add a LUT), resize and adjust the aspect ratio, change the playback rate and now adjust audio. But be warned: A change in audio sync isn’t reflected in the audio timecode. Currently a clip with a five-frame adjustment will make an incorrect EDL by five frames.

High Sierra will kill FCP 7. FCP 7 is a 32-bit application, meaning there are limits to how much computer memory can be addressed. MacOS High Sierra (10.13) is 64-bit, and will not run applications built for 32-bit. That said, MacOS Sierra (10.12) has presented no problems in my use of Media Composer, FCP 7 or Pro Tools.

MediaMover and Automatic Duck Media Copy. If you work on multiple projects, keeping track of where media is stored is difficult. Despite being the best NLE media manager, Media Composer doesn’t allow for folder or file names that tell much of anything about the media’s source or content. MediaMover by Random Video will examine the attached drive specified, find the folders that contain Avid media, and then reveal which projects are associated with the media therein. That media can be moved offline to another folder or drive. Automatic Duck Media Copy will find media associated with an Avid sequence, and copy those full clips to a specified location. Want to take the day’s dailies home? Build a sequence of those dailies, export as an AAF file (with no media), drop that AAF into Media Copy and specify where you want those media clips copied to. A great way to have a complete duplicate of media without consolidating. It works in Avid, FCP7, FCP X and presumably Premiere Pro.

Sub-Caps warning. Sub-caps can be a terrific replacement for many types of titles created in the Media Composer Title Tool. The advantages include: Sub-cap titles don’t need rendering; they don’t have a head or tail media limit so they can be as long as any sequence and be expanded on the head by any length; and adjusting the font, bounding box, drop shadow, screen position (and many other parameters) can be adjusted for all titles in the same sequence at once by clicking on Edit Global Properties. The big caveat: Many properties can be adjusted for all titles by mistake. There are global parameters settings within a sub-cap title, based on sequence or track, that can unintentionally change all titles rather than just one. In fact, many properties are by default set to be the same, which makes sense if you are subtitling a sequence and want all to look the same.